Welcome to the world of VR

Over the past year, the latest and greatest “thing” or buzzword in the world of cutting-edge tech is Virtual Reality.  If you’ve never experienced VR, you might be wondering what it’s all about. The short answer is, using Oculus technology and wearing a VR headset, you’re thrust into another environment with little more than tapping a button.

One of Imagine 360 VR’s technology developers, Mark Newsom, wrote a post that introduces the different VR headsets and technology.  If you’re interested in learning more about the technology side, contact Mark.

In this post, I’m going to cover how to plan for and film the immersive video that’s fed into the VR experience. Realistic 3D computer-generated worlds are nothing new, video games have been doing it for years. But capturing 360° video of real-life locations is a whole new ball-game—with new rules and equipment. 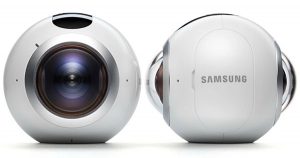 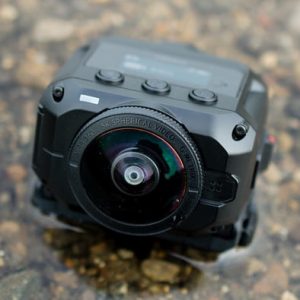 There are various ways to hold the camera rig. It all depends on the needs of the shot. A tripod or monopod is the most common, but you can hang it, hold it, drone it, and more.

Shooting video in 360° is not like shooting regular video. It has its own set of rules and considerations.

To keep things simple I’m going to use the term “camera” to describe the rig of the Samsung Gear 360 pictured above. Now, the first thing to remember is that 360° means EVERYTHING is in the view of the camera and will be in the shot. This includes you, your crew, any lights, microphones, equipment, every crack in the ceiling, and dirty footprints on the floor. This type of shot limits and gives freedom to the director at the same time. You may have to be in the shot, so be creative, don’t make it obvious—blend into the scene—or hide behind/under/in objects on location. When scouting locations, take the entire space into consideration. Envision the action that will take place, how should that action interact with the camera? And make sure the available lighting is suitable or get creative with camera placement.  With the Virb, we are able to use the awesome post-production feature known as Hyper Frame, which allows us to produce an entire movie with camera angles, pans, zooms, tilts, etc. after the fact.

Placement of the camera in the scene is key and important to storytelling. To capture the action of the scene, you need to consider what role the person wearing the VR headset will take. Are they participants or observers? Meaning, should the camera be placed an odd position, like hung from the ceiling or low to the ground? Or mounted six feet from the floor to equal to an average person’s height? In either case, the camera should be placed in or around the center of the activity. That way the viewer can explore the scene as they wish, and will have something of interest in all directions.

The last item to consider is camera movement. In order to achieve action, there needs to be an impetus movement, like a drone, a car, a track, or a person. Bear in mind, whatever is controlling the motion will be in the video. For example, if you hang the camera from a drone or helicopter those vehicles will be visible in the final result. There are ways to remove or hide smaller objects in post-production, but that is a lengthy process. Because the video will become an immersive experience, the motion of any kind needs to be calculated and intentional, otherwise, it can cause nausea or it can disconnect the viewer from the experience.

Capturing video is only half the 360° battle. All that footage (per camera, per location) will have to be downloaded, synchronized, stitched together, and processed before it gets put into a VR headset. And that’s an entirely separate blog post!

360° video has endless possibilities. Just imagine the places and experiences you can go and have without leaving your desk chair!